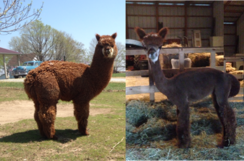 closest, with his buddy Hagrid.

8 months after being cria shorn.

Beau Topher came to our farm as a small male who needed a little TLC. He is shy and mellow, which being from a large farm, led to him being on the small side. We put him in a small group and Voila!
He has been maturing nicely and is starting to take a leading role in our program. He has the pedigree to stand behind his growing status on our farm.
in 2016 he took second in a TOUGH class at the Rail Splitter Alpaca show behind the color champion. We envision Topher taking the banner next year!

On the paternal side Topher continues to bring in the awards, a grand-dam with championship banners form Michigan Alpacafest and Michigan Alpaca Breeders Show and Fiber Fair, 2008.
see her page at:
http://www.crystallakealpacafarm.com/alpacas/crystal-roulette

Crystal Kalin went on to win Reserve Champion at the 2011 Futurity and collect an impressive number of first place and championship banners.

With genetics like these, impressive on both maternal and paternal sides, it is no wonder that Topher is getting all sorts of special treatment at our farm.